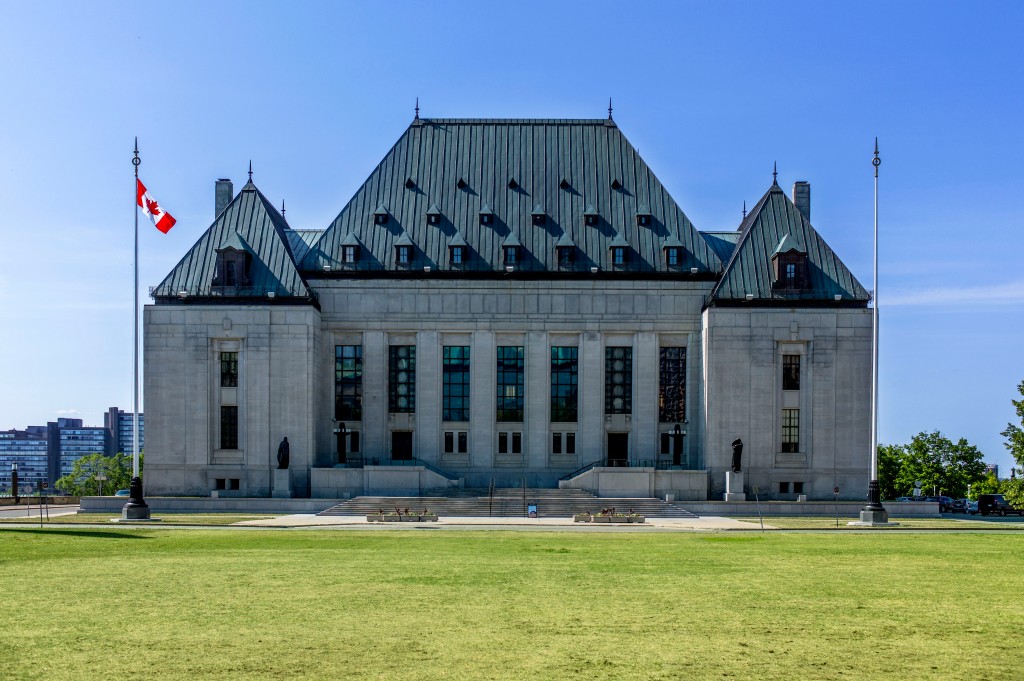 The Supreme Court of Canada (French: Cour suprême du Canada) is the highest court of Canada, the final court of appeals in the Canadian justice system.[1] The court grants permission to between 40 and 75 litigants each year to appeal decisions rendered by provincial, territorial and federal appellate courts. Its decisions are the ultimate expression and application of Canadian law and binding upon all lower courts of Canada, except to the extent that they are overridden or otherwise made ineffective by an Act of Parliament or the Act of a provincial legislative assembly pursuant to Section 33 of the Canadian Charter of Rights and Freedoms (the notwithstanding clause).

The Supreme Court of Canada formally became the Court of last resort for criminal appeals in 1933 and for all other appeals in 1949. The last decisions of the Judicial Committee on cases from Canada were made in the mid-1950s, as a result of their being heard in a court of first instance prior to 1949.

The increase in the importance of the court was mirrored by the numbers of its members. The court was established first with six judges, and these were augmented by an additional member in 1927. It was in 1949 that the bench reached its current composition, of nine Justices.

Prior to 1949, most of the appointees to the Supreme Court of Canada owed their position to political patronage. Each judge had strong ties to the party in power at the time of their appointment. In 1973, the appointment of a constitutional law professor, Bora Laskin, as chief justice represented a major turning point for the court. Increasingly in this period, appointees either came from academic backgrounds or were well-respected practitioners with several years experience in appellate courts. Laskin’s federalist and liberal views were shared by Prime Minister Pierre Trudeau, who recommended Laskin’s appointment to the Court.

The Constitution Act, 1982, greatly expanded the role of the court in Canadian society by the addition of the Canadian Charter of Rights and Freedoms, which greatly broadened the scope of judicial review. The evolution from the Dickson court (1984–90) through to the Lamer court (1990–2000) witnessed a continuing vigour in the protection of civil liberties. Lamer’s criminal law background proved an influence on the number of criminal cases heard by the court during his time as chief justice. Nonetheless, the Lamer court was more conservative with charter rights, with only about a 1% success rate for charter claimants.

The appointment of Beverly McLachlin as chief justice in 2000 has resulted in a more centrist and unified court. Dissenting and concurring opinions are fewer than during the Dickson and Lamer Courts. With the 2005 appointments of Justices Louise Charron and Rosalie Abella, the court became the world’s most gender-balanced national high court, four of its nine members being female.[2][3] Justice Marie Deschamps‘ retirement on 7 August 2012 caused the number to fall to three.[4] The appointment of Suzanne Côté on 1 December 2014 restored the number of female justices to four.

Personal Injury Cases:  There are no upfront fees and all these cases are governed by contingency agreements.  Legal fees will be based on a percentage of your compensation ONLY if we win your case.

Traffic and Criminal Cases: You will be quoted a “block fee” so there will be cost certainty.  There will be no extra fees even if your matter takes longer to resolve.

Corporate/Commercial Matters: Legal fees will be charged on an hourly basis and we will be as efficient as possible to save you time and money.

Real Estate Conveyances: Please contact our office for a quote as the legal fees is dependent on a significant number of seasonal factors.